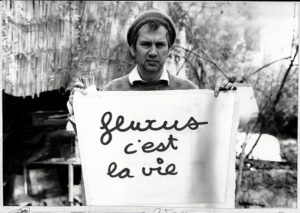 He became known to the public at the end of the 1960s, particularly through his “writings” in various media and forms. Part of the post-modern artistic avant-garde, Ben is one of the main founders of the Fluxus Group. He is an artist known for his performances, installations and writings.

Thus, universes as far removed from the artistic field as ethnism, ego or truth have entered his work. Ben enjoys an incredible popularity thanks to his “writings” that combine impertinence and accuracy of purpose.

Ben, whose real name is Benjamin Vautier, is a French artist of Swiss origin, born July 18, 1935, in Naples (Italy), from an Irish and Occitan mother and a French-speaking Swiss father. He is the grandson of Marc Louis Benjamin Vautier, a Swiss painter of the nineteenth century. He lives his first five years in Naples. After the declaration of the Second World War in 1939, Ben and his mother multiplied their travels: Switzerland, Turkey, Egypt, Italy…, to finally settle in Nice in 1949. He studied at the Imperial Park School and at the boarding school of the Stanislas College. His mother found him a job at the bookstore Le Nain bleu as an errand boy, then bought him a bookstore-paper shop. At the end of the 1950s, he sold it to open a small store, whose façade he transformed by accumulating many objects and in which he sold second-hand records.
Soon, his store became a place for meetings and exhibitions where the main members of what was to become the School of Nice met: César, Arman, Martial Raysse, etc. Close to Yves Klein and seduced by the New Realism, he was convinced that “art must be new and bring a shock”. In 1955, he discovered the shape of the banana and produced a series of drawings. This series marked the beginning of his graphic research. In 1959, he begins his “living sculptures”: he signs people in the street, his friends, and even his family. In 1965, he signs his own daughter, Eva Cunégonde, then three months old. At the beginning of the 1960s, several artists try to appropriate the world as a work of art. Ben will sign anything he finds: “holes, mystery boxes, kicks, God, chickens, etc.”. Ben will sign everything he finds: “holes, mystery boxes, kicks, God, chickens, etc.”, linking art and life, explaining that everything is art and that everything is possible in art. He joined the Fluxus movement in October 1962, following a meeting with George Maciunas in London. Between 1960 and 1963, he developed the notion of appropriation, of everything is art and everything is possible in art. He then began his series of “Tas”, heaping earth and waste on plots of land and signing them. In 1965, in his store, he creates a gallery of three by three meters in the mezzanine: “Ben doute de tout. He exhibits there Martial Raysse, Albert Chubac, Daniel Biga, Marcel Alocco, Bernar Venet, Serge Maccaferri, Serge III, Sarkis, Robert Filliou, Christian Boltanski, etc.”. In 1972, at the request of Harald Szeemann, he took part in Documenta V, where he met with Robert Filliou, Marcel Broodthaers, Giuseppe Chiari, Joseph Beuys, among others. In 1977, the group exhibition “About Nice” inaugurating the Centre Georges Pompidou was a kind of Parisian recognition of the research carried out and matured outside the capital, by the School of Nice. In the preface to the catalog, Pontus Hulten wrote: “Contemporary art would not have had the same history without the activities and encounters that took place in the Nice region”. He entrusted the preparation of the event to Ben. At the beginning of the 1980s, on returning from a year spent in Berlin at the DAAD, thanks to a scholarship, he met young artists: Salomé, Luciano Castelli, Helmut Middendorf and members of the German Violent Painting. On his return to Nice, he organizes with Marc Sanchez an exhibition-exchange between what he calls the French Figuration libre and young German painters. Robert Combas and Hervé Di Rosa, Robert Combas and Hervé Di Rosa are then exhibited in his house in Saint Pancrace, and François Boisrond and Rémi Blanchard, among others, at La galerie de la Marine in Nice. Very involved in the contemporary scene, he has always supported young artists and gives his point of view on all current events, whether cultural, political, anthropological or artistic, in his regular and prolific newsletters. He has been living and working since 1975 on the heights of Saint-Pancrace, a hill in Nice. Ben’s works are found in the world’s largest private and public collections, including the MoMA in New York, the Walker Art Center in Minneapolis, the Art Gallery of New South Wales in Sydney, the Museum Moderner Kunst Stiftung Ludwig in Vienna, the MUHKA in Antwerp, the Stedelijk Museum in Amsterdam, the Solothurn Museum, the Musée National d’Art Moderne in Paris, the Musée d’Art Moderne et d’Art Contemporain in Nice, the M. A.C. of Marseille, the M.A.C. of Lyon. Married with Annie Baricalla since 1964, he has two children, Éva Cunégonde and François Malabar.

In the post-duchampian context, and influenced by John Cage, George Maciunas, Dada and Isidore Isou, asking the question “What to do after Duchamp”, Ben chose the whole world as his studio. From 1963 to 1967, Ben wrote ten concept films. The first one was a poster statement stuck on the walls of Nice and Cannes at the time of the Cannes Film Festival.

The Writings: His first painting of words seems to be “Il faut manger. You have to sleep. ” from 1953, a simple affirmation of life. However, this simplicity conveys a strong concept: Ben produces an art of the idea, long before the beginning of conceptual art as defined in most specialized books. At that time Ben was looking for new art forms, to talk about art and the art world. He then developed through his writings numerous and varied themes (ego, doubt, death, sex, the new, money…). The sentences that Ben writes can be truths, comments (on the world, current events), scenarios, invectives (to the public, to the art world), observations… Appearing suddenly in the visual field of the spectator, they bring a smile, and often give food for thought.
The signature: He started signing in 1958: paintings, people, photos. Ben thought that if art is only a question of signature, then why not make a painting with just his own signature. Working on the concepts of self, ego and artist identity, Ben, “seems to say that since art is synonymous with the artist’s signature to the public, the more visible it is, the more the public will want that work. {…} At the same time, Ben talks about the ego/ego and the importance of self-reference in art, the exploration of the self and the ego – both subjectively and as a subject. “His 1960 manifesto “I Ben I Sign” shows the radicality of his approach.
Gestures / Actions: Down to earth, Ben’s gestures are similar to George Brecht’s “events”. They are also called “actions”. His first gestures date back to 1960, theorized within the framework of what he calls “appropriations”. Initially little documented, they are then photographed and titled, usually on a black support, with a succinct description. These gestures show small actions, a priori banal, daily, not very spectacular, that Ben puts forward, in a Fluxus spirit.
The performance “Life never stops” is one of Ben’s phrases. Reenacting the codes of happenings and performances developed in the United States in the 1950s (Black Mountain College, Allan Kaprow), Ben mixes life and art from the 1960s to produce performances called “Vomir”, “Hurler”, or “Dire la vérité”, which he performs near his store on rue Tonduti de l’Escarène or in the streets of Nice, whether or not he warns the public.

In 2010 Ben creates in Nice in the center of the Libération district the “Espace à débattre”.  A place that came to life through many events.

Three years later Ben proposes this place to his daughter Eva who sets up the gallery Eva Vautier. She produces many exhibitions, performances, debates, bringing together citizens from all walks of life, helping to defend these artists and contemporary art and creates a real dynamic contributing to give a new breath to the local artistic life.

born in 1935, in Naples
Lives and works in Nice

Produced for the exhibition “Shopping: a Century of Art and Consumer Culture” at the Schirn Kunsthalle in Frankfurt and the Tate Modern in Liverpool in 2002.

The Bizart Baz’art is a construction on a human scale; a hut in which the spectator is invited to enter. Decorated with objects, toys, slogans, pictures, images, words, symbols, the hut is in fact conceived as a “meeting place for secret services”, where agents would come to do their business.
Ben’s idea was to propose a gigantic installation on the theme of the unsaleable. But as I was looking for the unsaleable,” he explains, “I realized that the company’s shredding machine could swallow it all and sell it all. So I called it “everything is merchandise because everything is art, there’s no escape.

The profusion, the disorder of objects and words, blurring the legibility of each detail paradoxically gives meaning to the whole by showing a world saturated, cluttered, suffocated with objects. The title of the work, Le Bizart Baz’art, through a play on words with the word “art”, leads us towards a questioning of art. The questioning is fuelled by the inscriptions contained in the work. On the edge of a hollowed-out, perforated canvas, one can read for example “There was art here. There is no more art. Is it art too ? ». The artist wonders about the fragile limits between art and non-art, between art and life, art and poetry. 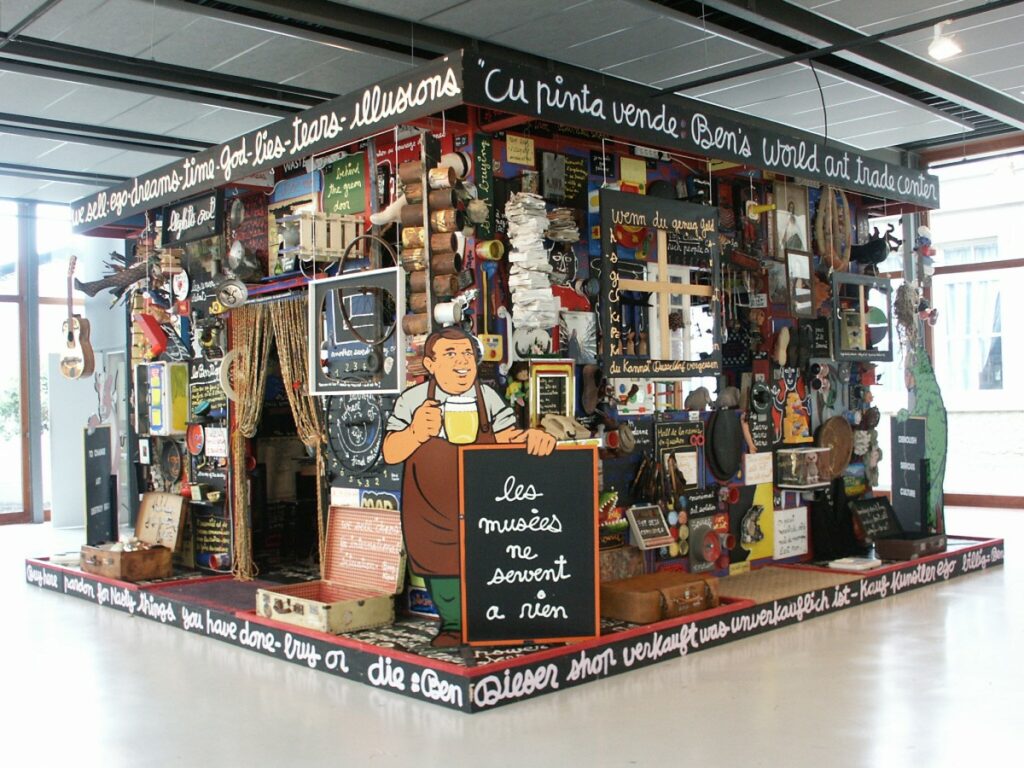 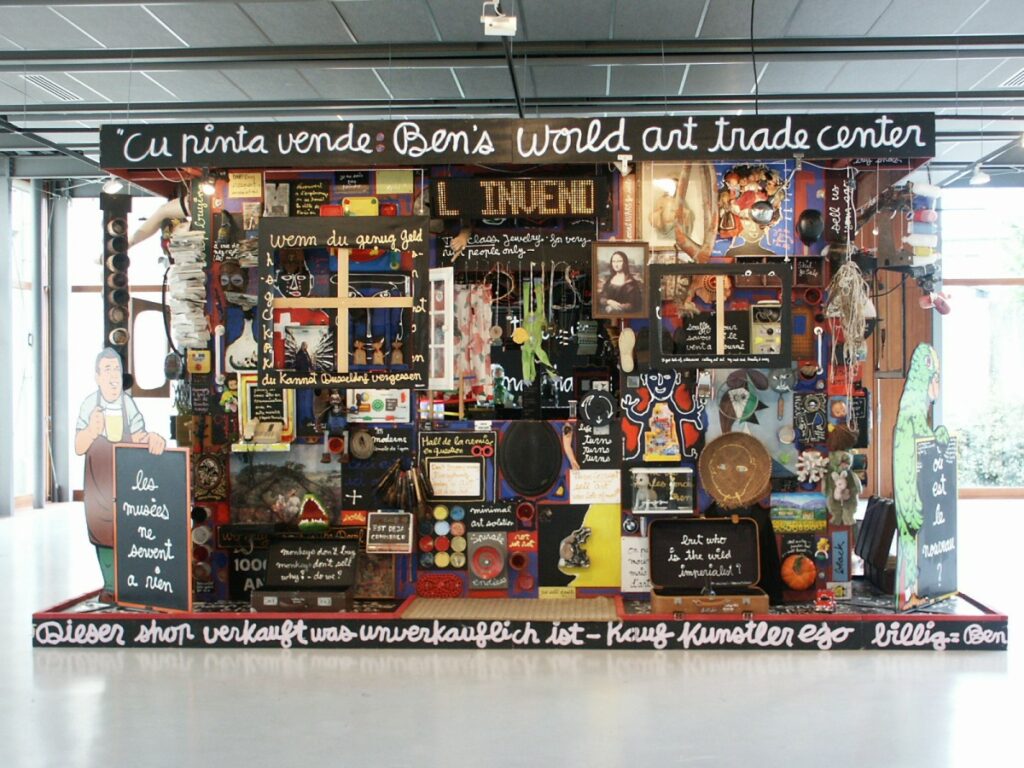 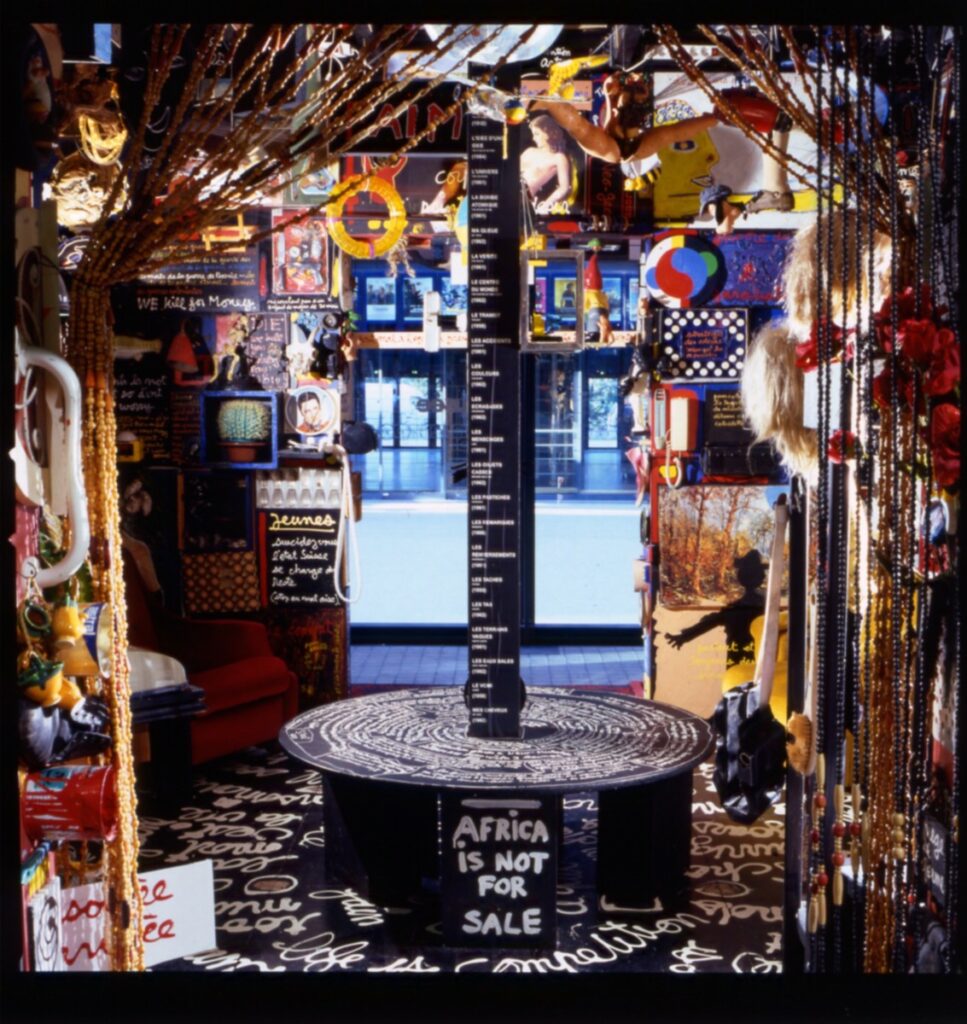 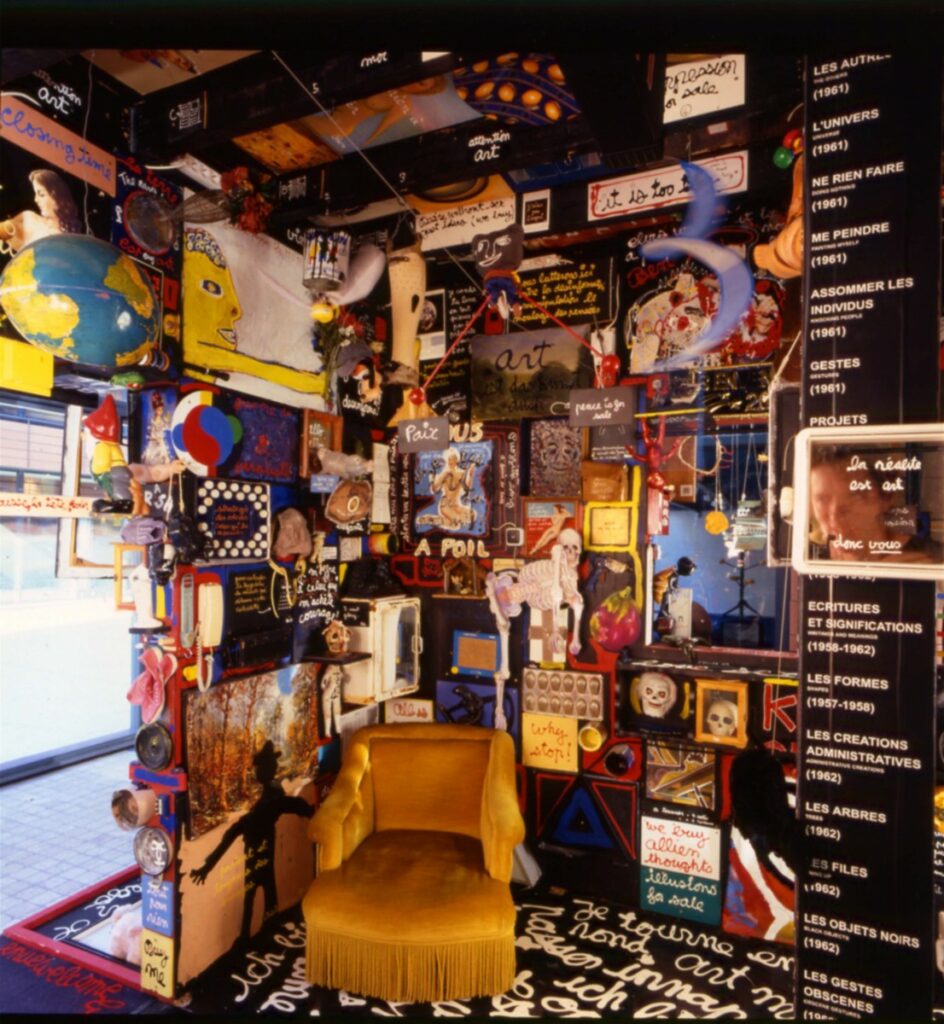 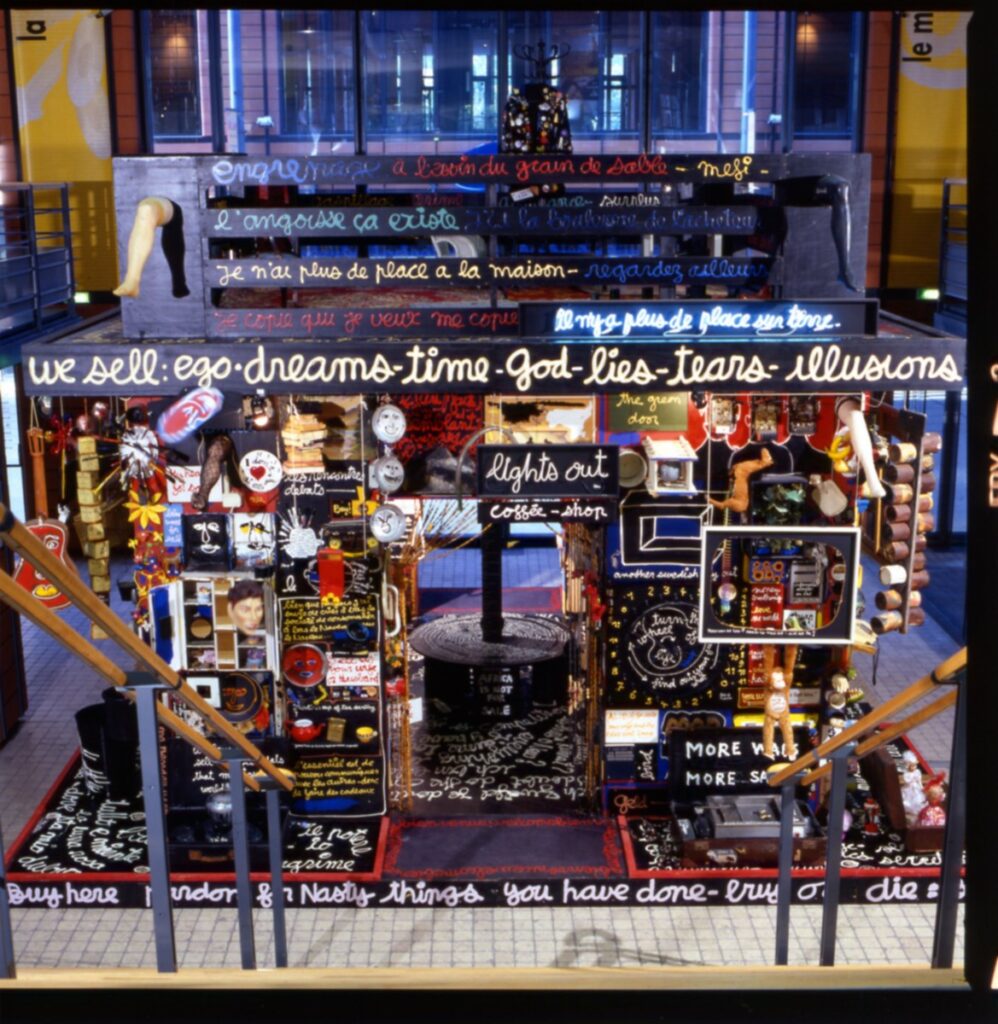 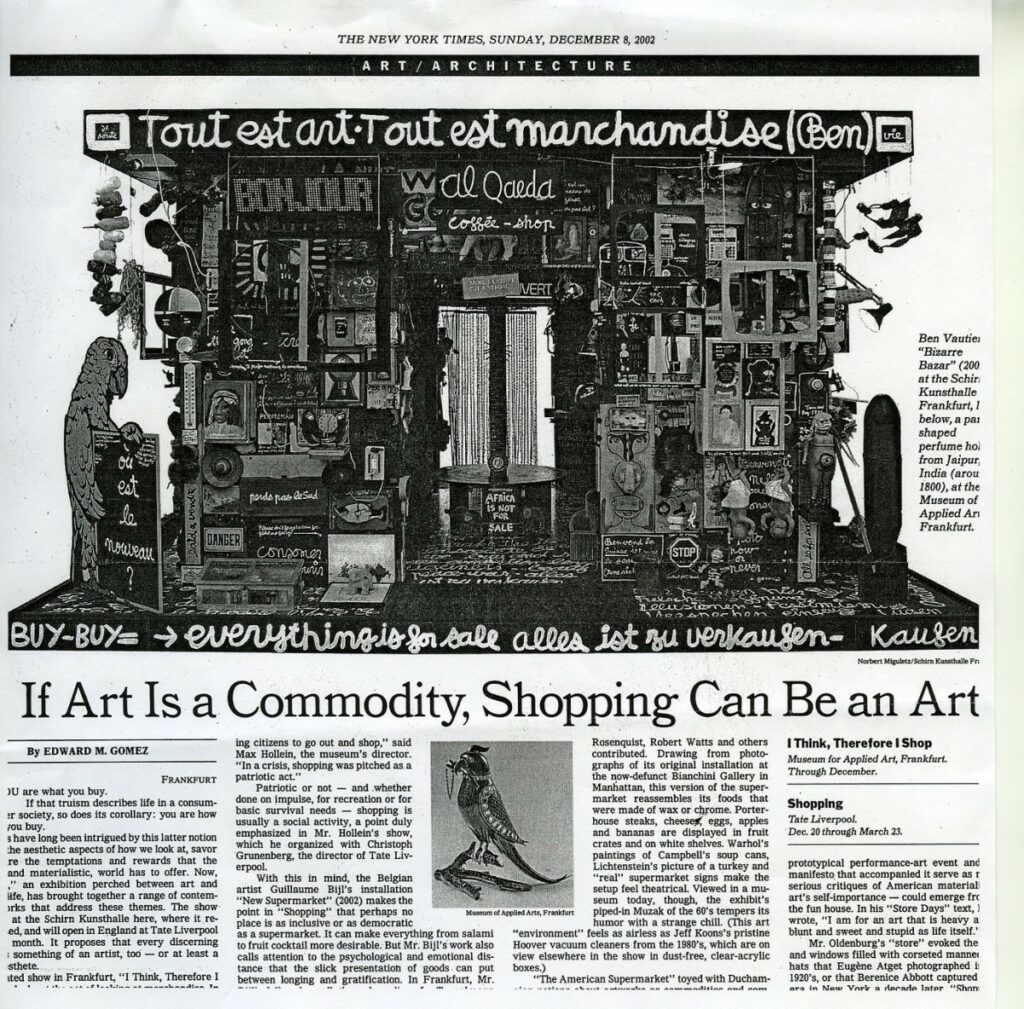 Official sponsor of the 14th Lyon Biennial of Contemporary Art, the CIC Lyonnaise de Banque exhibits in its atrium the iconic work Bizart Baz’art by the artist Ben until December 8, 2017. This work represents a hut gathering hundreds of everyday objects and symbolizing the consumer society. We also discover statements written in the form of short sentences, with the characteristic writing of the artist, on the theme of art and its commodification. Discover the accelerated montage of this work. 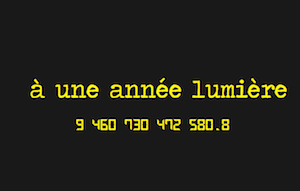 You have acquired a work by Ben Vautier?

You want to obtain a certificate of authenticity for the work?

To obtain a certificate you must:

Request form for Certificate of Authenticity:

The gallery Eva Vautier is the only one authorized to issue a certificate of authenticity from Ben Vautier.