For the Domaine Départemental de Chamarande, Ben collects more than 400 works, mostly from his personal collection, but also from private collections.
The exhibition “Être libre” reveals the multiple facets of an iconoclastic and provocative artist who has been challenging single thought for more than 50 years. It allows visitors to discover his work in all its complexity and contradictions, its joyful breadth and abundance, which crosses all fields of art and life.

A historical part presents a selection of significant works from the years 1958 to 1978.
At the end of the 1950s, Ben signs everything, thus appropriating, through his images and actions, the world as a whole. To illustrate these years, documents from the period are presented: posters, photographic and video archives, as well as a selection of his performances entitled “Gestures”.
He is one of the first artists to put art directly in the street, in Europe from 1959, by practicing his “Street Actions”. These are daily gestures, such as waiting at a bus stop, swimming across the port of Nice with his hat and clothes on, or eating pasta in the middle of the street sitting at a table. With his many actions, Ben became in the 1960s an essential figure of the Fluxus movement in Europe.

A second part of the exhibition opens the doors to Ben’s universe, which invests the different rooms of the castle with more up-to-date installations and new works, through a succession of characteristic themes: small ideas, portraits, mirrors, photography, ego and play.
He pursues his introspection in a journey through which the visitor is invited in turn to question his condition, his time, his society. Each new word, each new gesture is part of a quest for meaning and truth.
Exhibition open to the castle and the orangery – free access :
Wednesday-Thursday-Friday – June-September, 14h-19h – October, 14h-17h
Saturday-Sunday – June-September, 1pm-7pm – October, 1pm-5pm 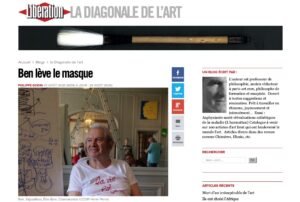