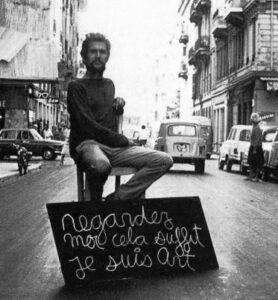 Everything is art? A question tirelessly asked in the History of Art and which Ben the artist raises again. Of his real name Benjamin Vautier, he was born in Naples in 1935. His future life will be built between Switzerland, Turkey, Egypt but also and especially in France, where he settled in Nice.

Questions, he asks so many and more in his paintings. Famous for his written works, constantly affirming or questioning the world around him. In 1950, he opens in Nice a shop in which he organizes exhibitions. This place will quickly become a meeting place for artists of the region, who will together feed reflections on art in general.

Ben then frequented César, Martial Raysse and Arman. Together, they will form a group of bubbling artists in search of novelties, a group that will be none other than the School of Nice. They wanted to continue the legacy of Marcel Duchamp and push art to its limits, following in the footsteps of John Cage or the Dada movement.

It was in 1953 that Ben wrote his destiny. “It is necessary to eat, it is necessary to sleep”, with this simple and obvious paraphrase, he creates his first “writing”. To better speak and question art, he decides to write it down, to put it in letters and to make writing a visual art. In this way, he begins a first step towards conceptual art that has not yet developed.

As a logical extension of his approach, Ben will then focus on the importance of the artist’s signature in art. In 1958, his first “signature” was born. He doesn’t just doodle on a piece of paper, no, he signs the world, everything that surrounds him, everything that moves.

In this way he questions the concept of ego, of the self, but also the idea of appropriation. These are strong notions that shake up the codes of art, as the artist wished. At the level of the art market, Ben underlines the weight of the signature today, which has sometimes become more important than the work itself.

To make the world one’s own, the task may seem tedious, but Ben does not give up. He will sign in abundance, people in the street, his friends, his family, and will thus create the first living sculptures, in 1959. By this labeling of his environment, Ben considers that he connects life to art, and comes back again to ask us if everything is possible in art and if everything makes art.

The thought of appropriation will be the object of his research until 1963. In the meantime, he joined the Fluxus group, which considers itself as a non-artistic movement and which questions the status of the artist and the work of art in society. Play and humor predominate in their group, and Ben’s work will be impregnated with them.

His handwritten punchlines in white letters on a black background will then resound like real slogans. He doesn’t hesitate to express himself on current events and make his words resound in writing. A big favorite at the beginning of the new school year, Ben multiplies derivative products and editions bearing his trademark based on kits, bags and diaries. He manages to put his art in a conceptual dimension while at the same time making it available to everyone.